Blog
You are here: Home / Blog / Dementia Care / Is It Parkinson’s, or Dementia with Lewy Bodies? 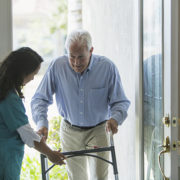 Each year, thousands of American seniors are told they have Parkinson’s disease, but they do not. For a number of these people, the true diagnosis is a similar but not as well-known disease: dementia with Lewy bodies (DLB).

Dementia with Lewy bodies affects as many as 1.3 million Americans, according to the Lewy Body Dementia Association (LBDA). And that estimate could be too low, considering that a number of people who’ve been incorrectly diagnosed with Parkinson’s still have not been given an accurate diagnosis.

Signs and symptoms for the two diseases can be very similar, in particular as they progress, because they exhibit the same root modifications in the brain.

Here are the symptoms you should be aware of, according to the LBDA:

Is the correct diagnosis really critical? Diagnosing DLB quickly and properly may possibly mean the difference between life and death, according to Howard I. Hurtig, M.D., Chair, Department of Neurology, Pennsylvania Hospital and Elliott Professor of Neurology. Incorrectly treating DLB can not only result in serious adverse reactions, but could even exacerbate symptoms and prevent accurate symptom management.

Much of the confusion among doctors is due to the fact that both Parkinson’s disease and DLB come under the exact same umbrella of Lewy body dementias.

Endeavor In-Home Care offers Mesa respite care and dementia care services for the surrounding areas. Contact us at 480-498-2324 to arrange a free home care assessment or to learn more about the way we can help your loved one with dementia, Parkinson’s disease, or any other condition common in aging.

The Benefits of Physical Activity for Seniors With Parkinsons